Dogs in the Frontline 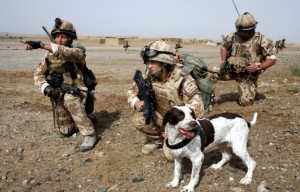 The motto of the British Police and Services Canine Association is ‘Canium Auxilio Servimus’ which means ‘with the help of dogs we serve’. Service personnel and Police have known the value and contribution of service dogs for decades. In the First World War tens of thousands of dogs were used to deliver vital messages. In the Second World War service dogs were deployed in a whole range of ways from acting as scouts, guards and trackers, to helping drag injured soldiers to safety.

Even in 21st century conflict our service men and women have dogs by their sides. Did you know that dogs are currently supporting our troops on the frontline in Afghanistan? The dogs in the Military Working Dog Unit are involved in searches, patrols and IED detection. The British base in Afghanistan, Camp Bastion, includes a state of the art dog training centre. There, service dogs continue their training to become accustomed to the extraordinary noises of helicopters, gunfire and explosions. Like their handlers they too have specific equipment to help keep them comfortable in the climate, including canine hydration packs and air-conditioned and heated shelters.

When I think of our troops in Afghanistan and elsewhere, I also consider the dogs that help them to serve, and hope they all return safely.